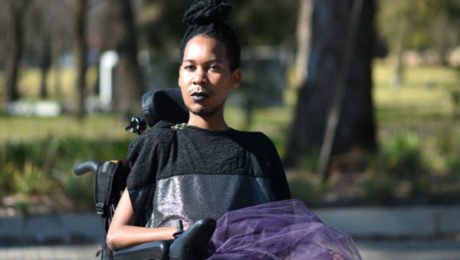 Eddie Ndopu is an internationally recognised human rights advocate who has earned his place on the global stage alongside heads of state and Nobel laureates.
Born with spinal muscular atrophy and a prognosis at birth that he wouldn’t survive beyond five years old, he is now in his 20’s. He has influenced public policy and advocated for social transformation with Evolve Initiate, the global start-up he founded. A social justice advocate since his teens, Eddie has constantly been shifting the goal posts. “It is possible for a young, black, disabled, queer person to achieve something,” he said.
Eddie is an internationally acclaimed, award-winning human rights advocate and was named by MTV as one of the most powerful disabled people on the planet. He is the former Head of Amnesty International’s Africa Youth Program and is a former researcher for the World Economic Forum. He holds a master’s degree in public policy from Oxford University (he is the first African with a disability to do so) and a bachelor’s degree with high distinction from Carleton University, Canada. He is also a graduate of the African Leadership Academy.
He has continued to push boundaries with his plan to go to space. He is in talks with Richard Branson and fellow South African Elon Musk and is raising funds towards his mission. His hope is to one day address the United Nations from space about disability and sustainable development goals, as well as the access gap. He is also in talks with the UN to work in New York around sustainable development goals.
Eddie’s innovative political protest began in November 2017 and ends in September 2018 and is to be documented in a feature-length presentation film called, Space Art: Body As Protest.
He personifies the phrase “Dream big!”